Why You Should Play Red For GP Cincinnati

While it might have a bullseye on its head after the SCG Seattle Open victory, now is a good time to play Red.  Several decks have been breaking through, including one that I’m going to introduce in this article, and if you’re a Red mage like me you should find something here to your liking.

In my last article I touched on how I’d been working with James Fazzolari over at Channel Fireball on RW Burn which he subsequently took to GP Melbourne and put up a very nice finish with.  Since that tournament, him and his crew have been continually improving the deck, finding different variations that were having more and more success on MODO.  He was slowly accumulating a ridiculous win percentage, and the list was catching fire (pun intended) across the internet.  It was only a matter of time before it caught on in the paper world, and we saw the accumulation of that with four top 16 finishes at SCG Seattle.  It’s important to note that each of those builds was fairly different, with minute changes that make a lot of difference when the deck is playing itself out.  Between all the Red mages I’ve been working with in the past few weeks, everyone has a different opinion on what they they think is best, so I encourage anyone who plays the archetype to try all of them before settling on one.  For reference, here is the latest list I saw from James, and if I were playing a tournament tomorrow with RW Burn, it’s the one I’d trust the most since I know how much time has gone into it and why a lot of certain cards have been ruled out-

Enchantments (3)
3 Chained to the Rocks 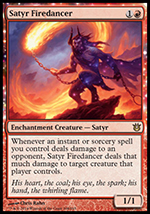 The TCG Chicago 5K and Other Flavors Of Red

Last week I was mulling over the possibility of going to the TCG 5K in Chicago, but I was not terribly confident in the Burn list I had been playing.  I knew it was good, but it wasn’t exactly the kind of Red deck I’m crazy about and I felt like some of the conclusions folks were coming to surrounding it were not necessarily true.  As the week dragged on, the itch to play Magic at a competitive level grew to it’s usual high pitched whine in my head and I figured out a ride situation to get down there.  Now I just had to find a deck.

A few months back, Magic professional and writer Adrian Sullivan played a RW “Aggro” list that he ultimately won a 5k with.  I always liked the deck, but felt that the original version was outdated and remembered that he lost to Mono Blue in the SCG Open that he top 4’d with it at.  Losing to Mono Blue has been the bane of my existence for the last several months, and unless there was an updated version with a significantly different plan, I couldn’t see myself rolling with his deck.

Luckily I’ve spent most of my life in Madison, WI, which also happens to be Adrian’s home (among other pros) and hit him up on Facebook to see if he had been working on things.  Turns out he had, and after a short discussion, some test matchups, and a few squeals of joy later, I settled on that deck for the 5k.  I present to you the brainchild of Adrian Sullivan,  Adam Jansen, and Ronny Serio:

There’s a beauty to this list that just can’t be seen when you first look at it on paper.  Playing it reminds me of the first time I picked up Sligh when I was a kid and curved out into Ball Lightning followed by a fist full of burn to the face.  It has all the great elements of Red that you could want and it can play whatever game is demanded of it.  This flexibility is the secret sauce of this deck, and I’m going to do my best to explain to you how it works and why it’s better than your other choices.

It’s even easier to see when you look at the whole deck post-board:

It was in a sideboard slot that was up for debate between Chandra’s Outrage and Homing Lightning.  There’s applications for all three, but ultimately at the 5K almost every situation I was in revealed Fated Conflagration to be better.  In one game against GW Aggro, my opponent curved out into a turn 3 Ajani that immediately ticked up to 5, after which I played Conflagration on my turn to kill it and scry into much needed supplementary removal.  If you need land, you can scry during your upkeep like Magma Jet.  It kills Polukranos, which came up in my match against Jund Monsters and ended up swinging the tide of that game back in my favor.  Against Control, it allows you to board out your Mortars for a card that is far less dead and gives you more outs to Jace and Elspeth.  Overall, I couldn’t recommend it more, and the intensive mana cost was never an issue even though you might have a game somewhere over the point of time where it could be a problem.

One additional note, Adrian has mentioned that a 2/2 split of Shock and Searing Blood might be better in the board.  I was aware of it before the 5K but wanted to keep the additional tempo of a playset of Shocks against Mono Blue, and ultimately I’m still comfortable with that.  Blood is however incredibly strong against other decks, mainly other aggro variants or Burn decks, so it’s still worth it at times depending on what you think the field might consist of.  I might ultimately come around on his opinion too, I need to test it again more to get the full sense of what I think is right.

Mono Red Devotion in the Top 8

The last deck I want to touch base on is an interesting list from a top 8 competitor at the 5k.  Over the course of the tournament, I watched Kevin Heath barrage opponents to death with his own blend of Red.  For those of you who haven’t seen the list, here is what he was playing-

The first thing that made my eyes go wide (well, after watching him pummel folks to an 8-0 record to start out the swiss) was the 21 land count.  21 lands, 4 of which are Nykthos and 1 of which is Mutavault???  What the hell?

I spoke with him about this and his logic was fairly sound.  With four Magma Jet, you can often scry into the additional lands that you need beyond the two required to operate.  Burning-Tree and Nykthos fuel many of the other draws, so most of the time it’s fine, with some of the time requiring a little more aggressive mulliganing.  That plan is not foolproof, as I’ve seen in post-tournament testing, but it was good enough to allow him to cut through a field of talented players.  He was also playing in his first major tournament, and making a decent number of mistakes along the way (no worries Kevin we all do!), but he was still getting there.  I was rooting for him big time when he went up against Josh McClaine (top 25 in the world) in the first round of the top 8 and took down game 1 with an incredible series of draws that culminated in a late game fury of double burning-tree plus Phoenix into Fanatic for 7.

Maybe in the end he was simply running hot, as all good tournament runs require a little of.  But the deck makes you smile a bit and the added amount of cards + removal you get to play with only 21 lands gives it some kind of strange longevity that the old Red Devotion lists didn’t have.  Kevin if you read this, congratulations again on making Top 8 and I wish all the best for you in the future.  I know there were some controversial moments in a few matches that people took sides on, but hopefully it’s all water under the bridge at this point and I hope that you continue to improve on your list for future big tournaments.

12 thoughts on “Why You Should Play Red For GP Cincinnati”